This roof had been replaced 20 years ago with a 40 year roof. The shingles were doing OK, but the problem was with the installation. The step flashing on the back on both sides wasn’t there, instead they just had a single piece of L-metal that ran up the whole wall that was about 1″ wide. As you can see from the picture below, that’s not even close to step-flashing, which is required. There was also a leak coming through near a pipe on the back side and a piece of compromised plywood that was causing problems. Unfortunately this 40 year roof only lasted 20 years (with leaks) because some shortcuts were taken by the previous installers.

As you can see it doesn’t look too bad from the ground. 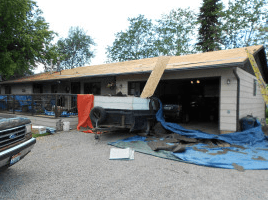 Once we got down to the plywood the mistakes became noticeable and some sheets of plywood had to be replaced. 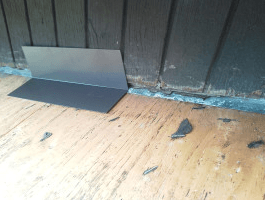 This picture shows the big mistake on he back side that was causing some problems. The silver piece is all they had for flashing. Anywhere the roof meets a wall step flashing must be used like the piece pictured there. 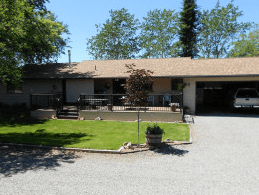 All finished up! They went with a CertainTeed Landmark PRO shingle in Resawn Shake. This is a 40-year roof that is going to last because it was installed right and the previous mistakes were fixed up.